Eric Damen was born on 13 February 1964 in ‘s-Hertogenbosch. He graduated from grammar school (in Dutch: gymnasium ß) in 1982 and afterwards completed his Higher Vocational Education training at the Tilburg Teacher’s School, in the field of mathematics and physics. After working as a replacement teacher for some time, he served his military duty until 1988.

Early 1989, Eric started his career in pension schemes at Amev (nowadays known as ASR Insurances (in Dutch: ASR Verzekeringen)) at the department of reinsurance. At the same time, Eric began his education as actuarial calculator, which he finished successfully in 1990. He continued to educate himself through a study for candidate actuary (nowadays actuarial analyst). He graduated in 1994. Job wise, he switched from Amev to Philips Pension Fund.

At Philips Pension Fund, Eric was an employee at the actuarial department for three years, followed by Head of the department Pension fund management. In the summer of 1999, Eric made a career move from handling pension schemes to consultancy in the field of pension schemes, by accepting a job at PricewaterhouseCoopers (currently known as PwC). In his new role as senior consultant, Eric was involved in several projects during two and a half years. These projects were about changes and harmonization of pension schemes.

Towards the end of 2001, Eric returned to Philips Pension Fund to set up the planning office and manage it. The main responsibilities for this office were to liaise with the offices of several pension funds, developing training materials and providing internal trainings, set up and manage SLA reports and implementing knowledge management within the office. At the same time, he was acting Head of the department of Communication.

In 2006, Eric worked for PricewaterhouseCoopers for one more year as a consultant. Since then, Eric decided to set up his own business, combined with a part-time job as Senior Consultant for Ortec Finance, at the department of Private Wealth Management.

In his free time, Eric was involved in several associations, at management level. His strong skills are summarized in a few words: social, team player, committed. His hobbies are sport in general and soccer especially, as well as travelling and anything that is sociable. 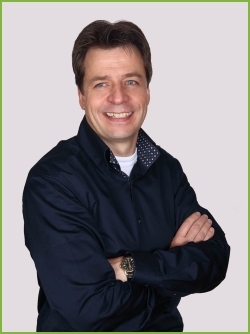